Once a provincial backwater in southern Germany, Bayreuth is now a cultural capital of the country. The northern Bavarian town these days is inseparably connected to Wagner - the composer's personal life, the controversial family history and the annually sold-out summer festival.

But there is plenty more to see and do in the town and the area - and BayreuthHotels.com is an independent guide for those who are thinking of visiting the place for the first time.

The first mentions of Bayreuth ('Baierrute') are back in the 12th century, when the local rulers built fortifications in the area. The expanding settlement was awarded a city charter in the 13th century but much of the early history is difficult to unearth because of the devastation suffered by the town during the religious Hussite wars of the 15th century.

Bayreuth later became the seat of the local nobility, who were called margraves. Somewhat equivalent to the rank of a marquess, a margrave was a title originally given to local rulers holding border lands in the name of the Holy Roman Empire.

What put Bayreuth on the map, in a cultural and historical sense, was the marriage of Margrave Friedrich to the sister of Friedrich the Great, the ruler of the important province of Prussia to the north.

The arrival of Margravine Wilhelmine - used to the Royal Court in Berlin - shook up the provincial complacency of Bayreuth. During her life in the town she and, to a lesser extent, her husband were responsible for the association of Bayreuth with various forms of culture in the mid-18th century (depleting the city coffers as they built!). Wilhelmine herself wrote an opera and corresponded with authors such as Voltaire.

Some of the best-loved present-day landmarks in the Bayreuth region date from the time of Wilhelmine:

By the end of the 18th century, Bayreuth had passed into the hands of Prussia, was then occupied by France during the Napoleonic era, and eventually ended up in the hands of Bavaria.

The 19th century brought the arrival of the second great cultural influence. The composer Richard Wagner decided to build his Festival Theatre on a hill outside the town (donated by the local council).

Nowadays the Bayreuth Festival attracts thousands of visitors each year to hear performances of Wagner's work and performances are sold out.

Wagner's anti-Semitic writings and the increasingly extreme right-wing politics of certain family members and associates meant that Bayreuth became closely identified with the rise of the National Socialists in Germany. Winifried Wagner, Wagner's daughter-in-law, invited Wagner fan Adolf Hitler to performances and to the family house and became a close personal friend and supporter.

At the end of the Second World War, Bayreuth was badly damaged by bombing, with more than a third of the buildings destroyed.

Bayreuth became the capital of the Upper Franconian region in 1949 and opened its own university in 1975. It now boasts a population of more than 70,000 inhabitants and is a popular tourist destination for cultural events, as well as a centre to explore the surrounding scenery in areas such as the Fichtelgebirge and Franconian Switzerland.

The site includes details and maps of town-centre accommodation, as well as hotels and guesthouses situated a little bit further out. Those who want to make a tour of the area will also find hotel listings and locations for the Fichtelgebirge region to the northeast and for the Franconian Switzerland area to the southwest. 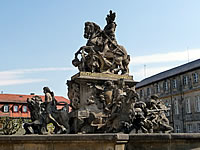 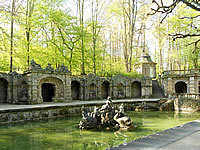 Grotto at The Hermitage 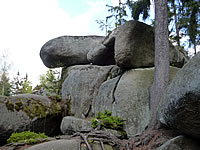 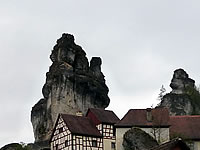